Report: Most Expensive Cities to Raise a Family in 2023

Harmony Healthcare IT, a data management firm that works with health data, ranked the top 100 most populous cities in the U.S. based on data including healthcare, childcare, and home costs to determine the most and least expensive cities to raise a family. Here are the results. 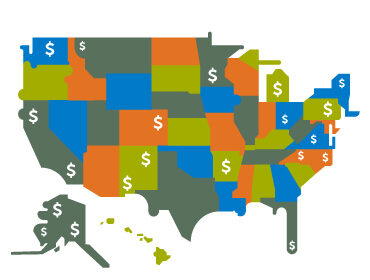 It’s an expensive time to be living in America. Add in children and it costs even more. But one good thing to come out of the pandemic is that many families are no longer tied down to one location because of a job. Fully remote positions along with hybrid roles are giving families more flexibility to live in more affordable places.

But where should families move? Our new report aims to find some of the most and least expensive cities to raise a family in 2023 by looking at a variety of data including the cost of living, education, childcare, crime, healthcare, and housing. We compared the 100 most populous cities in the U.S. to come up with this list. 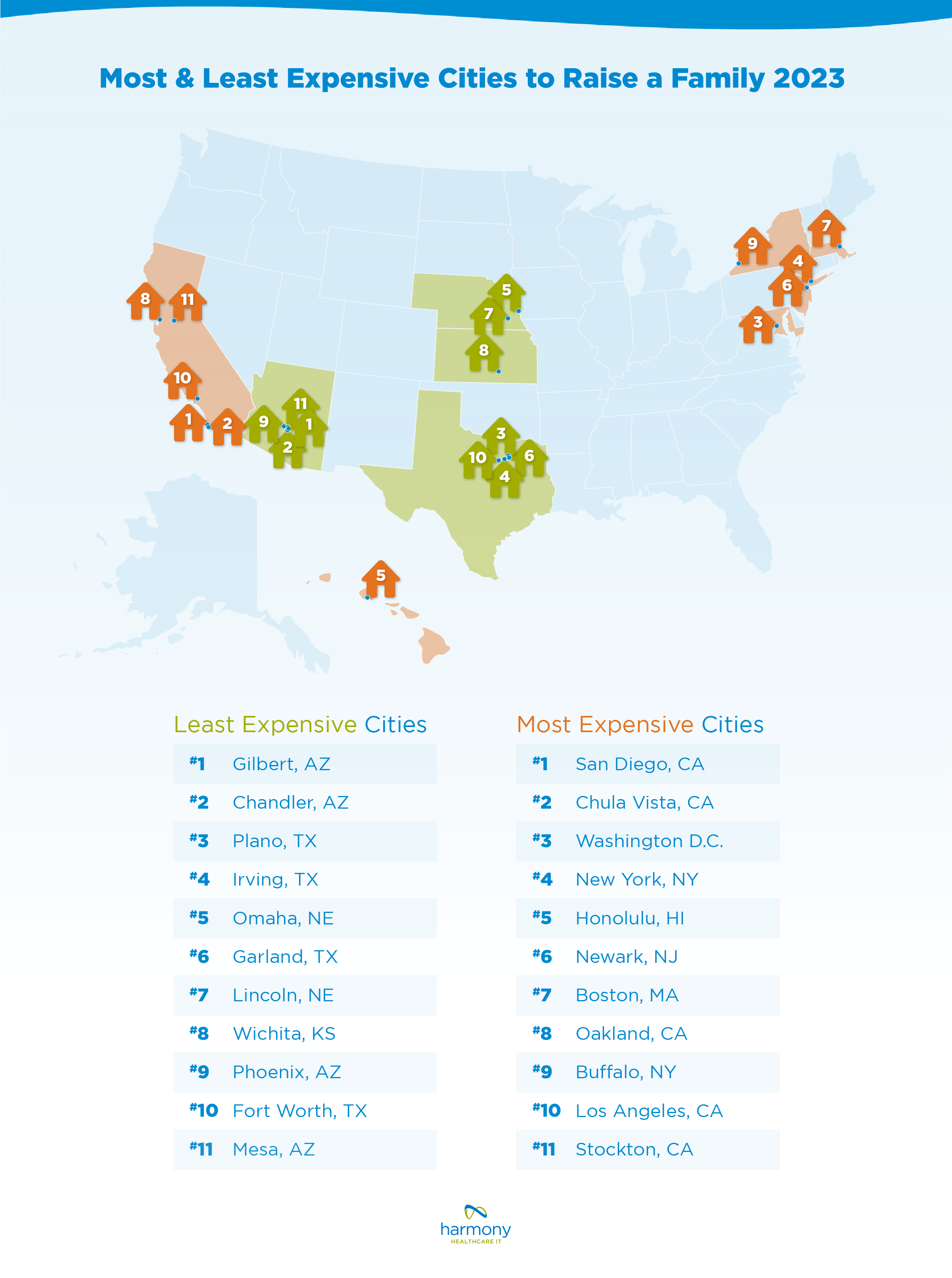 When it comes to cost, two states reigned supreme as the best places to raise a family: Arizona and Texas. Gilbert and Chandler in Arizona topped the list as the least expensive places in the U.S., and Phoenix wasn’t too far behind along with Mesa.

Meanwhile in Texas, four cities made the top 10: Plano, Irving, Garland, and Fort Worth. Other affordable cities include Omaha and Lincoln, Nebraska, and Wichita, Kansas.

As for the most expensive cities, while it may be easy on the eyes, California is not easy on your wallet. San Diego and Chula Vista tied for the most expensive cities in the U.S. to raise a family. Both cities ranked the worst for gas prices (the state average is $6.25). They also had the worst apparel and recreation costs per the Consumer Price Index.

Outside of California –  Washington D.C., New York City, and Honolulu are also costly. These cities have some of the highest costs in the nation for childcare and healthcare. 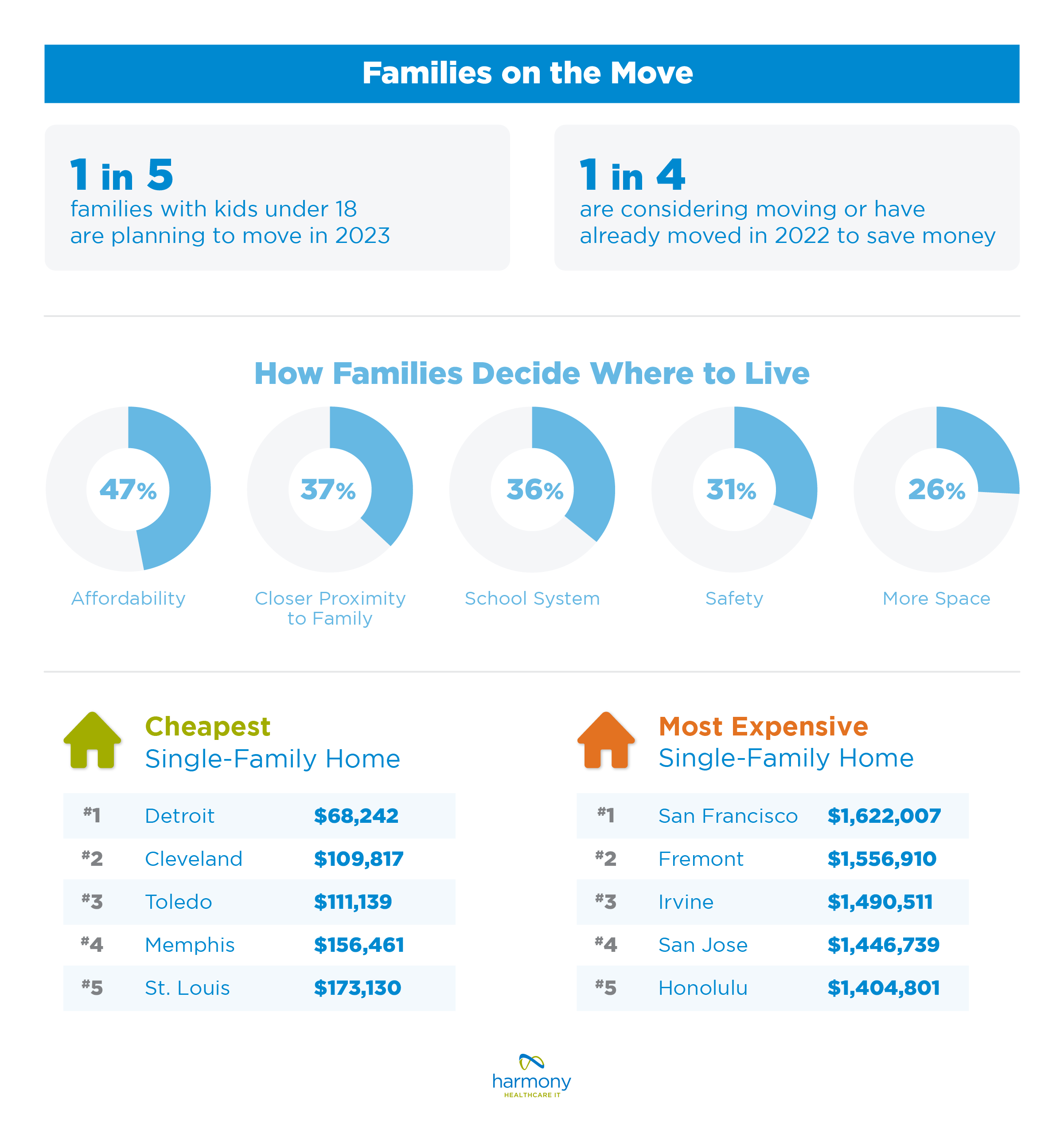 The main draw for families looking for homes is affordability. Nearly half (47%) said that’s the top factor when deciding where to live. Other reasons are to be closer to family, the school system, safety, and more space.

Of the 10 most populous cities in the U.S., the city with the cheapest single-family home is Detroit where people pay an average $68,242. However, it is the worst city in the nation for safety according to FBI crime data. Detroit has 1,938 violent crimes annually per capita.  To put that into perspective, the average number of violent crimes across the 100 most populous cities is just 691.

People have to drop more than a million bucks in cities with the most expensive single-family homes in the nation. The top four cities are all in California. In San Francisco, the average price is $1,622,007. Honolulu ranked 5th most expensive with an average price of $1,404,801.

The Cost to Raise a Family 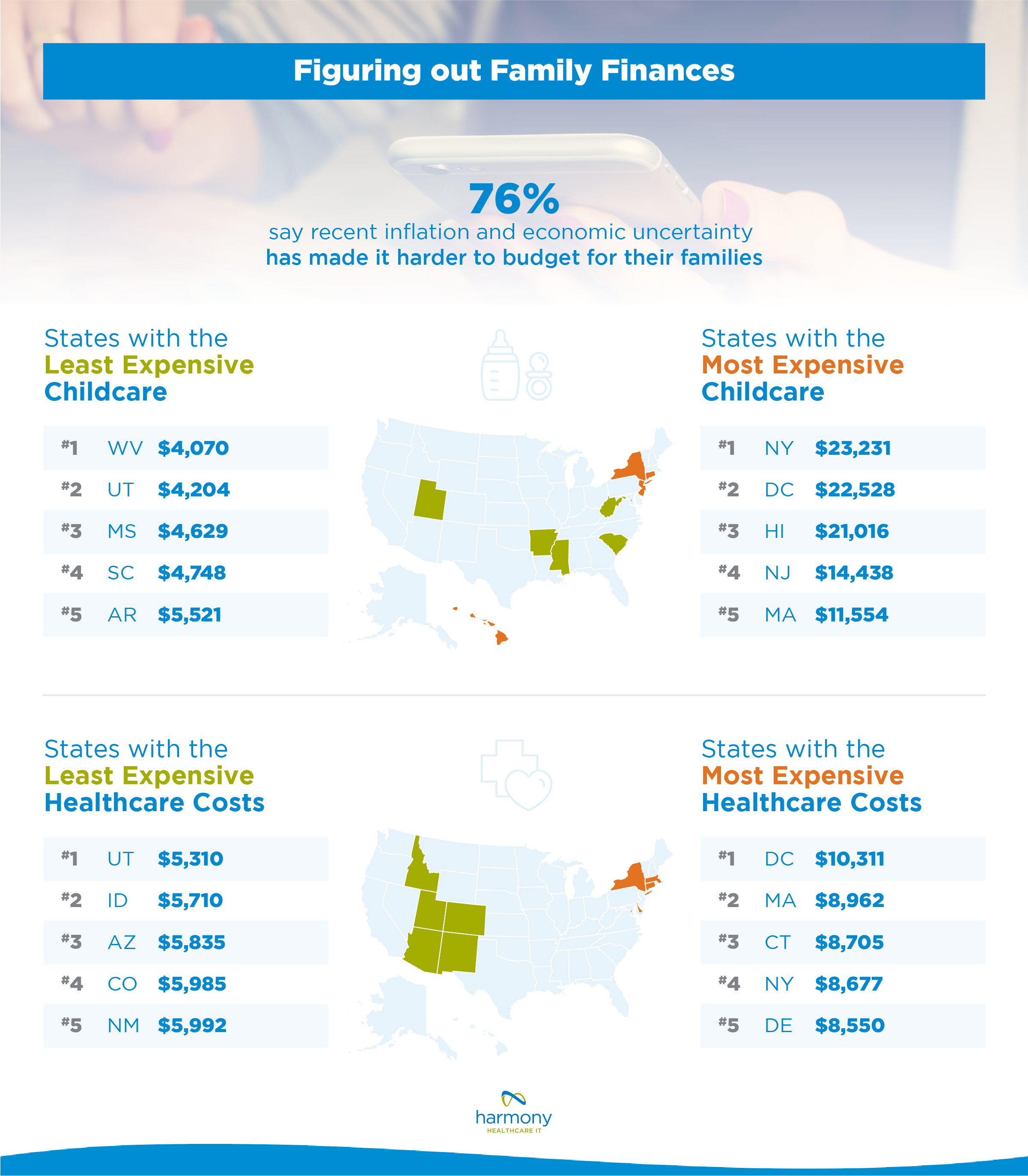 Nearly 4 in 5 (76%) parents say inflation and recent economic uncertainty have made it harder to budget for their families. Inflation has impacted everything from prices at the grocery store to gas. On top of those costs, families also have to pay for childcare and healthcare.

New York has the most expensive childcare costs. On average, families are shelling out $23,231 annually for it. Washington D.C. isn’t far behind with $22,528 and parents pay about $21,016 annually in Hawaii.

Meanwhile, the most affordable childcare is in West Virginia, Utah, Mississippi, South Carolina, and Arkansas. However, it’s still not cheap. The cheapest state is West Virginia where parents pay $4,070 annually which comes down to about $339 a month.

As for healthcare costs, Washington D.C. once again tops the list for the worst prices. On average, people pay $10,311 yearly in D.C. nearly double what people in Utah pay ($5,310). Utah is the least expensive state in the nation when it comes to healthcare.

Families have more options to move to cheaper states now more than ever before. With increased work-from-home opportunities and hybrid roles, parents can look for more affordable places to raise their children comfortably. There are a lot of options available to find the best one for your family.

To come up with the national rankings we analyzed the 100 most populous cities in America. To determine our ranking, we compared the cities across five key metrics on a 100-point scale. The five key metrics were:

In October 2022, we also surveyed 1,001 Americans including 246 parents with kids under 18 years old about their current home and potential moves planned. Survey respondents ranged in age from 18 to 83 with an average age of 38. 49% were men, 49% women, and 2% transgender.

When using this data and research, please attribute by linking to this study and citing Harmony Healthcare IT.