Struggling with Sleep: New Survey on Insomnia in America

Harmony Healthcare IT, a data management firm that works with sleep study data, surveyed more than 1,100 Americans about their sleep habits to learn what is keeping people up at night, and how the pandemic is impacting their sleep habits two years later. We also analyzed Google search volume related to insomnia in each state and major city across the country.

New Research on Insomnia in America

The Centers for Disease Control and Prevention reports every adult should be getting seven hours of sleep a night to stay healthy. However, many Americans aren’t getting close to that, and it’s not from a lack of trying.

Nearly nine out of every ten people we surveyed say they have trouble falling asleep. It’s not something that happens once in a blue moon. More than half of people admitted they struggle to sleep at least once a week if not more.

Most Common Sleep Searches by State 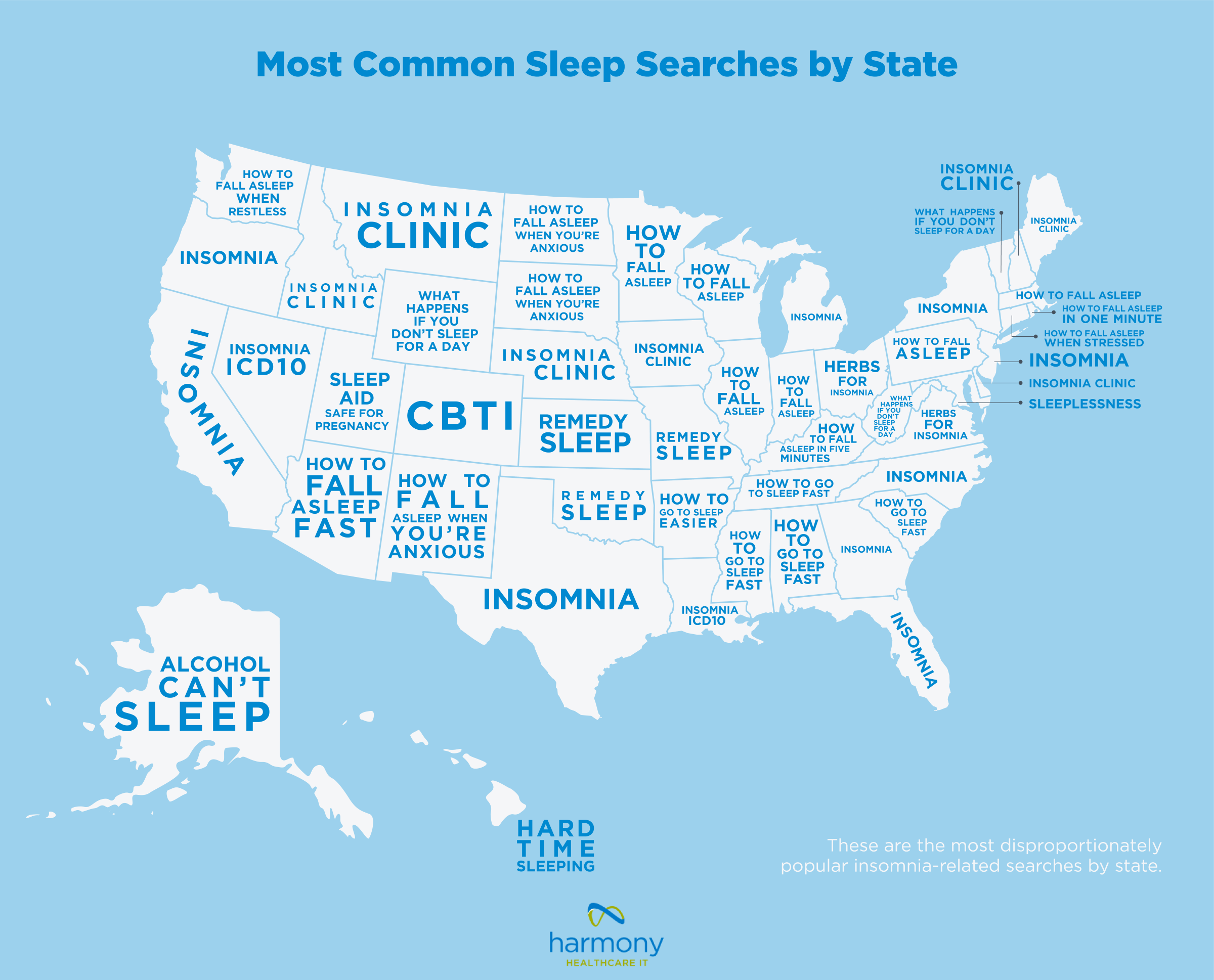 Americans search “insomnia” the most when Googling about sleep or a lack thereof. Searches about sleep and insomnia have increased in January and August every year since August 2018. It appears to coincide with the end of the holidays and the start of the school year, but further research will need to be done to learn more.

Women in Utah appear to be struggling with pregnancy insomnia. The most popular search in Utah was “sleep aid safe for pregnancy.” Ohio and Virginia wanted to know if there are herbs to help with insomnia. Drinking doesn’t appear to be helping anyone in Alaska, where the state’s top search was “alcohol can’t sleep.”

People living in Vermont, West Virginia and Wyoming don’t seem to be getting any sleep at all. The most searched phrase in all three states was “what happens if you don’t sleep for a day.” 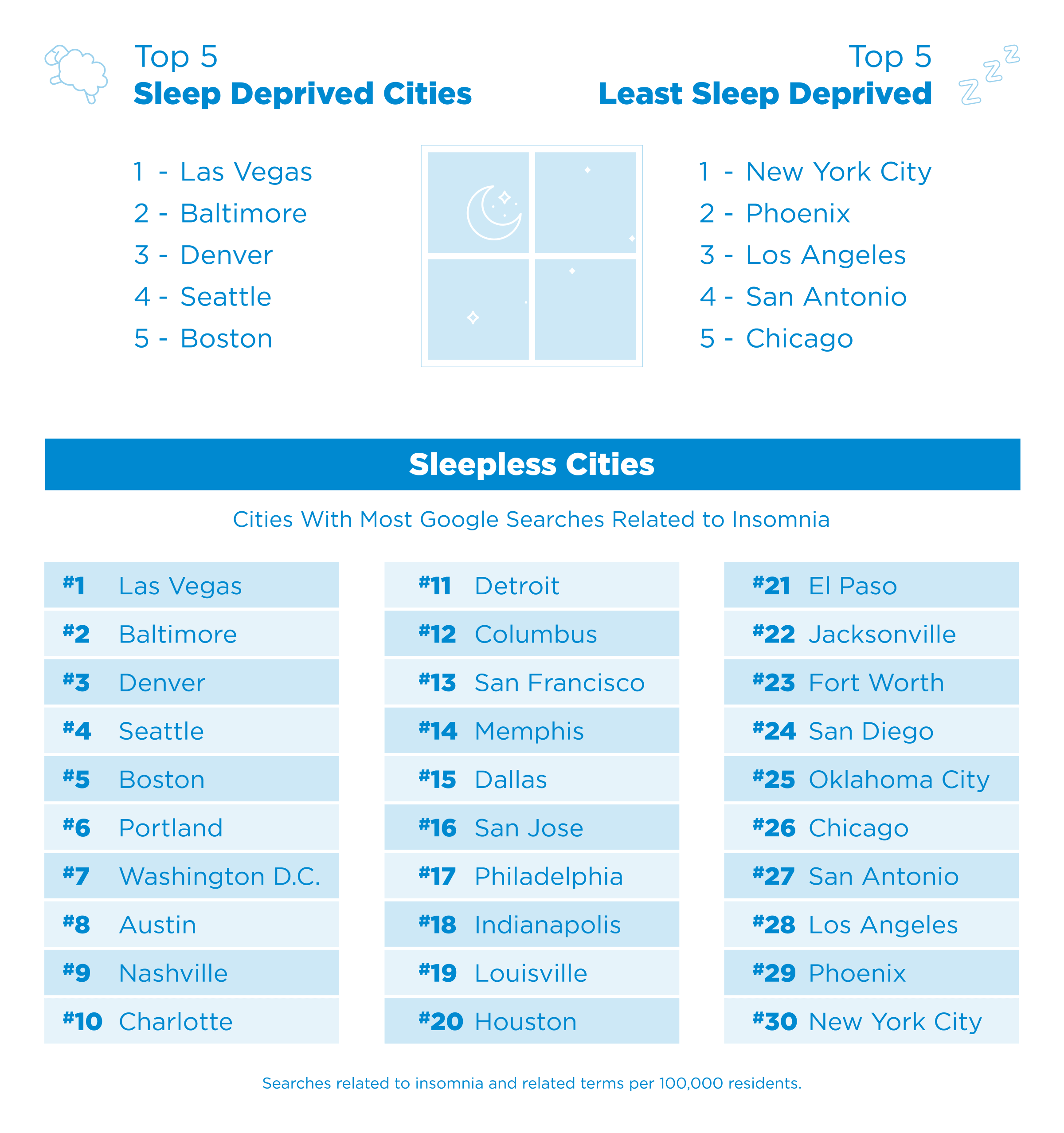 It looks like all those lights, shows, and casinos in Las Vegas are not helping anyone win the jackpot when it comes to sleep. Of the 30 most populous cities, Las Vegas searched about sleep issues the most. It was followed by Baltimore (2nd) and Denver (3rd).

It may be time for New York City to get rid of its nickname as “the city that never sleeps.” People living in America’s biggest cities appear to be used to all the noise. New York City, Los Angeles, and Chicago all searched the least about insomnia.

More than one in five people (21%) said the pandemic has directly impacted their sleep. We’ve now been in the pandemic for more than two years, and survey respondents admit it’s still causing them to lose sleep. One in five said they are sleeping worse than they were in March 2020. Another 19% said their sleep is just as bad as it was in 2020. 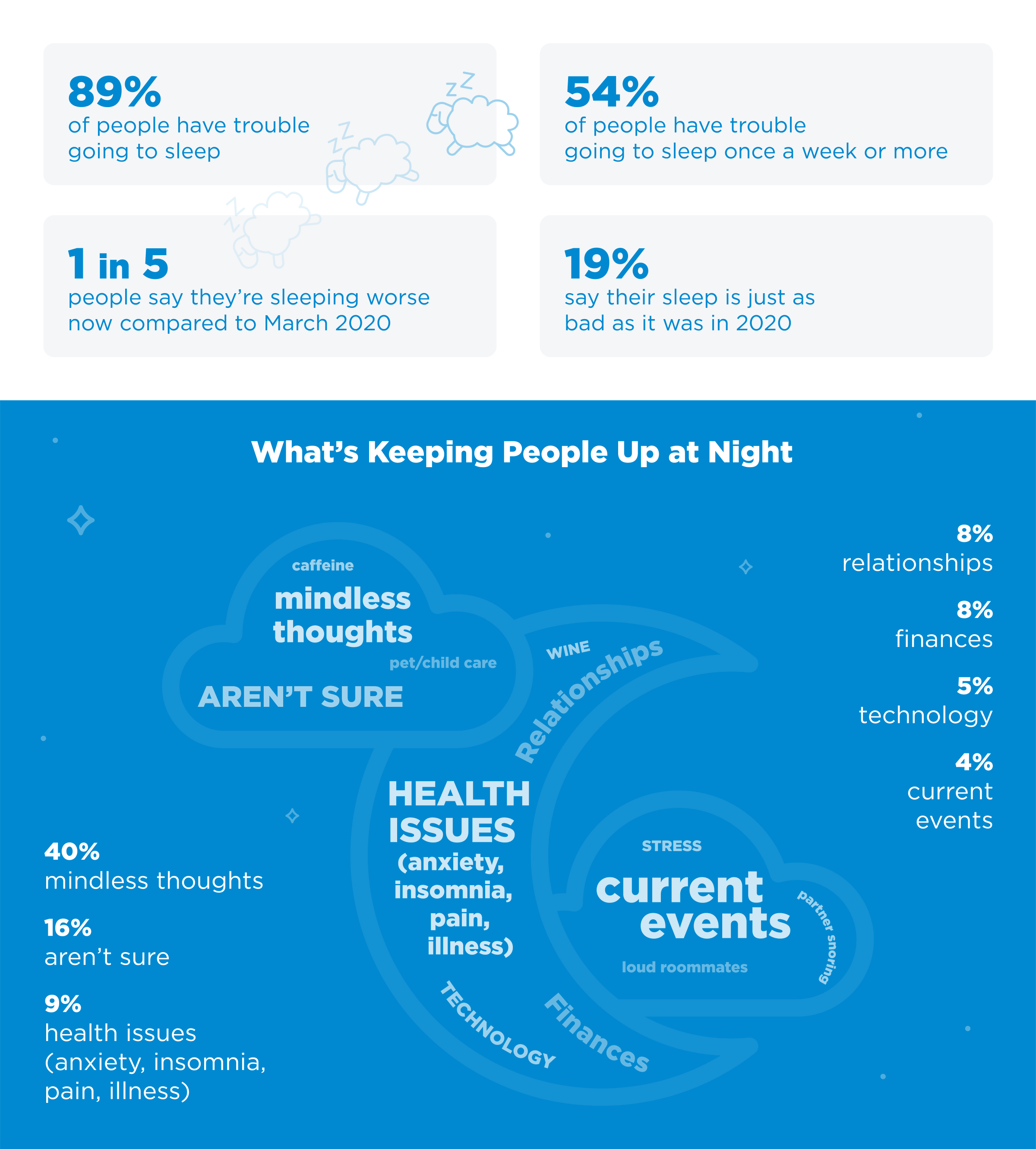 Survey respondents admitted the noise in their head is keeping them up most at night. Two out of five said mindless thoughts are to blame for their sleep struggles. But others (16%) frustratingly aren’t sure why they can’t get some shut eye.

Nearly one out of ten people said health issues like physical or mental illness causes them to stay awake. Others we surveyed believe relationships (8%) and finances (8%) keep sleep at bay.

A few people mentioned actual noise as a reason for their sleeplessness. A couple people blamed loud roommates, some mentioned childcare or pet care, and one person surveyed said their wife’s snoring keeps them up at night.

While technology has changed the world in many good ways, we also know that it is a double-edged sword. Studies show blue light from phones and other technology can lead to sleep issues, especially when people look at it right before going to bed. More than three out of four people (76%) we surveyed admitted they look at their phone before going to sleep. Four out of five went further to say their phone is within an arm’s reach when they sleep.

When people can’t sleep, many do turn to technology to try and get drowsy again. Nearly one in five (19%) scroll on their phone. Another 17% try to get themselves mentally tired by counting sheep, but almost one in ten people admitted they normally give up and get up.

Interestingly, 30% of people turn to drugs or natural remedies to get sleepy. Of the people we surveyed, 15% said they take melatonin, 8% smoke marijuana or eat an edible, and 7% take a sleeping pill.

The majority of people surveyed have pulled an all-nighter, and more than half of people did it on purpose! The main reason for pulling an all-nighter was because of school or work. Unfortunately, another 30% just couldn’t sleep. Others (16%) admitted they were spending time with friends at a party or hangout.

Hindsight is 20/20, and more than half of people surveyed admitted they regretted their all-nighter. However, two out of every three said they haven’t ruled out pulling another all-nighter in the future. 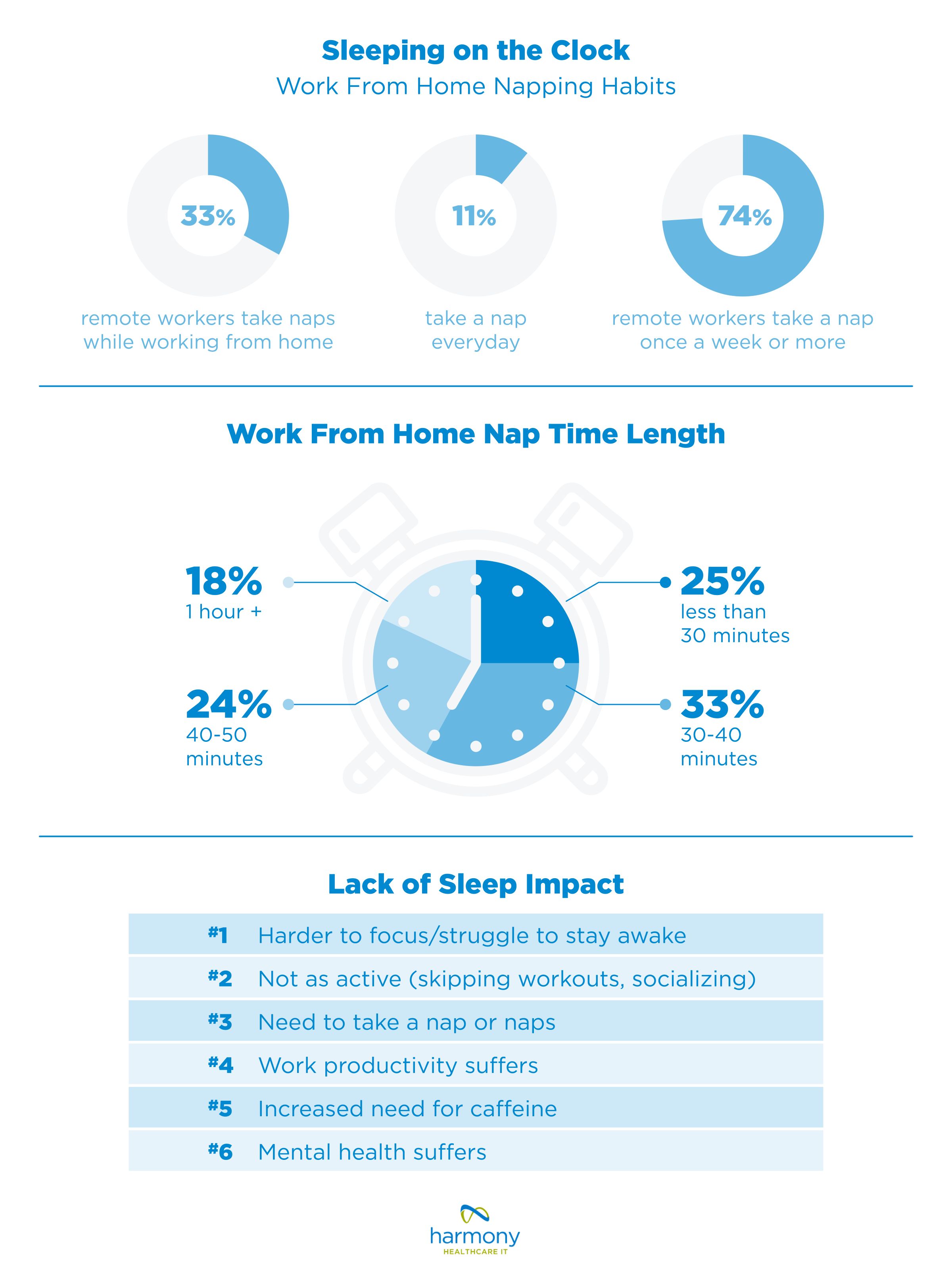 Surprisingly, some people who work remotely or have hybrid schedules are getting a lot of extra shut eye during the day. One out of every three people we surveyed owned up to taking naps while working from home. Of those, 74% said they nap once a week if not more.

People admit that they turn to naps when they are running on empty. Lack of sleep causes all sorts of issues including difficulty focusing & staying awake, lethargy, struggles with productivity, an increased need for caffeine, and increased mental health issues.

When it comes down to it, everyone should be aiming to get at least seven hours of sleep (eight for adolescents!). If you can’t get it today, don’t feel like it’s the end of the world. Tomorrow is a new day to try again and get your health back on track.

For this report, we also analyzed more than 800 search terms related to “insomnia” and variations of the term in all 50 states and the 30 most populated cities across the country. In order to rank which states and cities search for these terms the most, search volume was calculated per capita, or per 100,000 residents.

Fair Use
When using this data and research, please attribute by linking to this study and citing https://www.harmonyhit.com/.