Vaping has become an increasingly popular trend, but a recent outbreak of lung injuries related to vaping, or e-cigarettes, has led medical professionals and policymakers to sound the alarm for concern.

According to Centers for Disease Control and Prevention (CDC), more than 1,800 cases of lung injuries due to e-cigarette, or vaping, use have been reported in 49 states as of October 29, 2019. Millennials and teens have been affected the most by these vaping-related illnesses. In fact, according to the CDC, the vast majority of these cases (nearly 80%) have been under the age of 35.

As a health data management firm, we were interested in discovering more about the habits, reasons and feelings toward vaping among millennials and young users. We recently surveyed 1,800 Americans between the ages of 18-38 who actively use vaping products to find out more about vaping and its popularity. 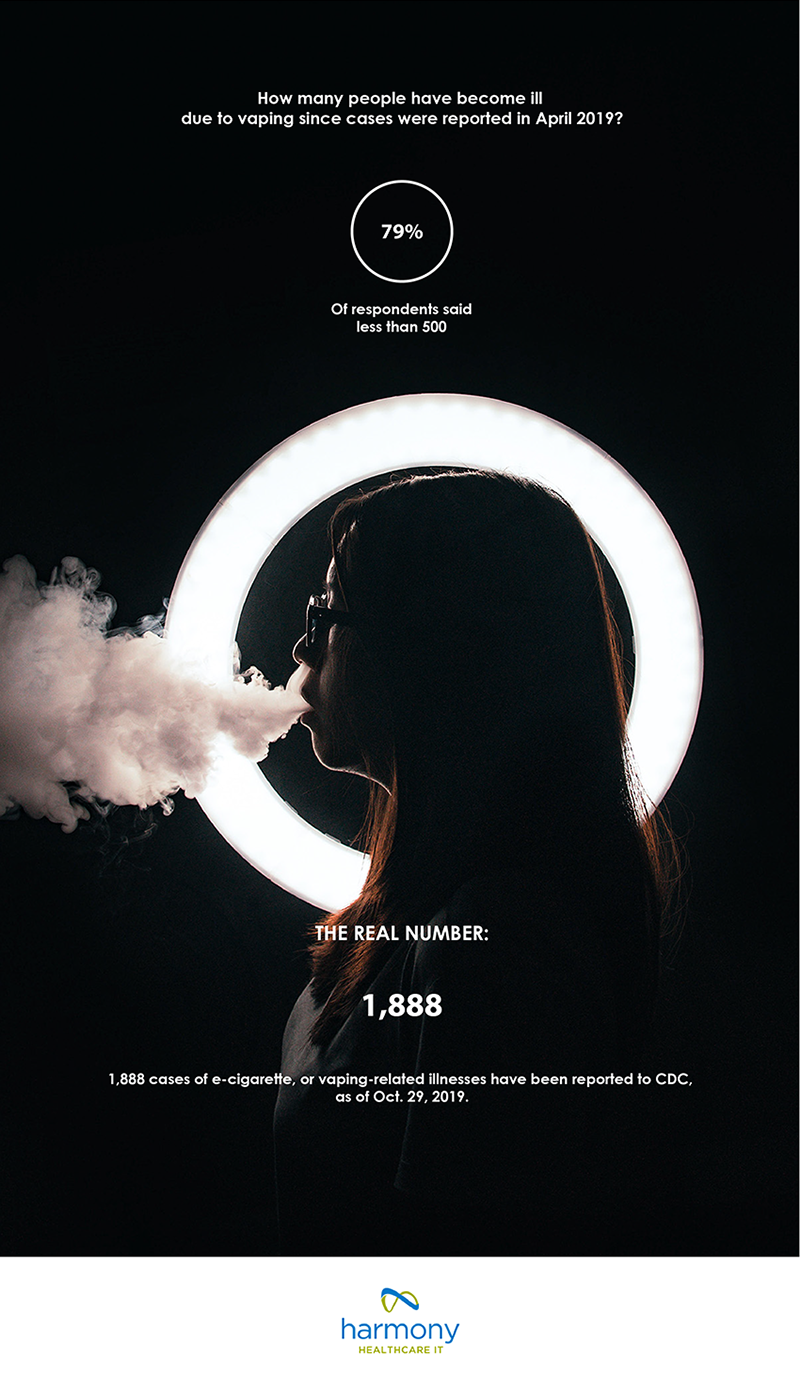 While some states are being proactive by putting policy measures in place with the hopes of curbing vaping use and accessibility among young adults, the CDC notes there is still uncertainty around the root causes of vaping illnesses and overall health risks of vaping.

Although exact health risks may not be known, what is known is that young adults are vaping both nicotine and cannabis products. According to respondents, 41% use nicotine vaping products, 30% use cannabis vaping products and 27% said they use both. Vaping also seems to be a relatively new trend among users. Of the survey respondents, more than half (59%) of nicotine vaping users said they have been vaping for two years or less, while 53% of cannabis vaping users also said they’d been vaping for two years or less.

The majority of users might be new to vaping, but there also seem to be several that are heavy users. Among nicotine vapers, 31% said they finish an entire vaping pod or cartridge within two days or less. To put that into perspective, one pod or cartridge is equivalent to two or three packs of cigarettes. But perhaps where nicotine and cannabis vapers differ the most is how much they spend on each product. According to respondents, nicotine vapers spend an average of $55 per month on vaping products such as pods, cartridges and vaping pens while cannabis vapers spend nearly double that amount at $97 per month.

It’s also interesting to note the conceptions related to vaping and health. Nearly 80% of all vaping users said they felt safe while using vaping products, however when asked if vaping itself was healthy, only 29% said yes.

According to the CDC, 1,888 cases of illnesses and 37 deaths related to vaping or e-cigarettes have been reported since October 29, 2019. Considering those risks, is there a lack of concern among vaping users? When asked if they were concerned about the illness outbreak, respondents were split right down the middle at 50%. They were also split 50/50 when asked if the amount they vape has decreased since becoming aware of said illnesses. Perhaps most surprising is that 1/3 said they would continue to vape even if someone they were close to became ill due to vaping.

Despite the conversation and uncertainty around who’s to blame for the vaping illness outbreak, it’s clear that more research and education are needed, especially among young vaping users. Nearly 80% of survey respondents vastly underestimated the number of vaping illness and injury cases that have been reported, believing that less than 500 cases had been cited – a number in stark contrast to the actual number of 1,888.

Until more research is conducted around vaping and vaping-related illnesses, it seems that a combination of prevention and education are currently the best tools to help curb these illnesses and injuries.